A layman’s review of Maryan 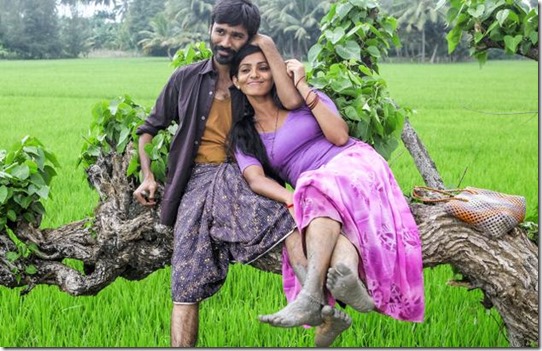 Heroines in Indian movies have usually nothing to do except run around trees or provide the glamour element. When was it the last time when you saw a heroine provide a memorable performance? Parvathy Menon is a surprise package in Maryan. Bharat Bala has tried to extract the most from her and she has not disappointed him. Parvathy performs like a seasoned actress, providing a scintillating performance, leaving everyone else, except of course Dhanush, far behind.

Once you see Maryan, it is difficult to believe Dhanush debuted in what was almost a semi-porn film. Again, the credit goes to Bharat Bala. Dhanush manages to up his performance level in every film. We can rest assured that we have a brilliant actor to replace Kamal Hassan. It was not surprising that there were people in the audience who felt Dhanush could be the next Kamal Hassan after his performance in Maryan.

I had a feeling that A.R. Rahman, was losing his touch and was increasingly churning out garbage. Were the producers and directors responsible for the decline of the genius? Maryan proves it – the other way round. ARR is in full flow in the movie. ‘Innum Koncham Neram’ and ‘Nenje Ezhu’ are sure to be chartbusters.

The breathtaking cinematography by Marc Koninckx takes the film to a higher level. This is one reason why you must watch the movie in big screen.

If this is a movie review, why is there nothing much about the movie itself? It is just because Bharat Bala seems to lose his way after the interval. Dhanush’s ‘escape’ from the kidnappers is so long drawn that you desperately feel like having a fast-forward button. It doesn’t mean the movie is brilliant before the interval. You don’t know whether the guy who murmurs something to Maryan and longs for Panimalar (Parvathy) is really ‘The Villain’. He unceremoniously disappears after a blow from Panimalar’s at the end of an aborted rape attempt.

There is also the pointless death of Dhanush’s friend Appu that doesn’t help the narrative in any way. Bharat Bala also appears clueless about Dhanush’s mother, who is dead against the love affair. The director shocks everyone, including Parvathy, by a sudden inexplicable change of heart.

The director compensates Dhanush’s listless escape with the emotional reunion scene. There is nothing of the dramatic mad rush towards each other. Parvathy gradually realises Dhanush’s presence near her. There are hardly any words exchanged. This is the Bharat Bala Maryan misses through the most part of the movie.

Published in cinema and review